Okay... I couldn't resist but this title refers MOSTLY to the temperature in Athens the day I took this series of pictures. These hot men were doing the traditional changing of the guard ceremony in 112 degree temperatures. They guard the tomb of the unknown soldier. Their shoes had taps on them so the sound they made while they did this march was wonderful. 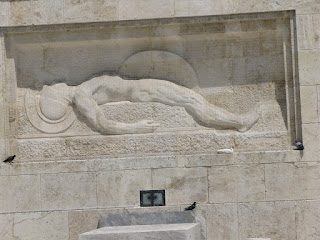 The ceremony took about 8 minutes and when they finished there many tourist lined up to take pictures standing next to these soldiers who were not allowed to show any facial expression.

This tourist behaviour bothered me so you won't see any of those pictures. I think they look dignified until someone in shorts goes up to stand next to them. Iwas told if you get to close to them or the tomb they will slam their gun butt down on the ground to warn you away.

They stood in the sun completely still with sweat pouring down their faces. I was brought to tears when one of the soldiers who was not at guard took a towel and very gently wiped the sweat from their faces. His job was also to keep the crowds from being disruptive and interfering with the men who were at guard. This small act of kindness was overwhelming in it's tenderness. That kind of thing will get me every time.

I loved this ceremony and the tomb has been there being guarded since 1932 and is guarded around the clock by soldiers called Evzones. It is a great honor for them to do this and they are punished if they do something wrong. They are not paid but each greek male must do 1 year military service and they must qualify. 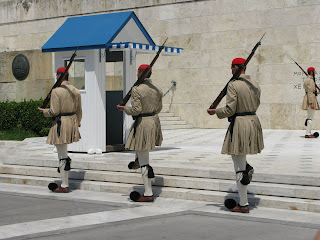 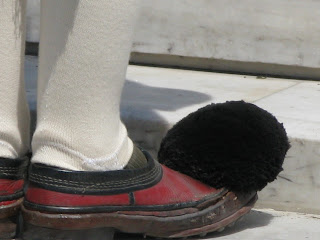 These shoes were really amazing... I plan to investigate why they look the way they do...what is the deal with the pom poms I wonder. They sold copies of the shoes in the tourist shops ...go figure. 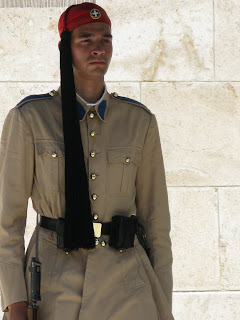 The Evzones have to be a certain height so all Greek men cannot do this. 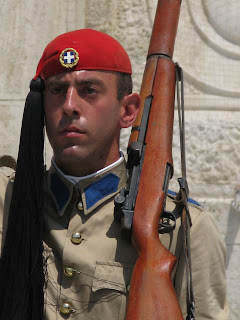 This was a very tightly choreographed ceremeony all movements are done in unison ... high stepping ...arm swinging, and guns changing position. I am sure there are technical terms for these movements but I care more for their beauty and majesty than the correct term to call them.
In Greece young men do a a mandatory year of military service and they compete to do this ceremony.
Each change of guard spends 1 hour standing guard this was a brutal temperature to be doing this. I hope they freeze their underclothing before they head out. The 2 guards who marched away at the end of their hour were drenched with sweat.
Did I mention it was hot???
They hold this leg raised position for quite a long time it was impressive. I am not sure how many times they repeat it. 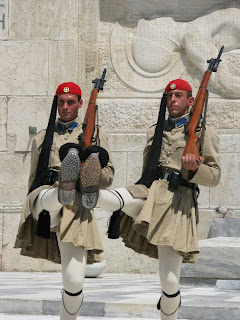 See how high he lifts his feet it is very striking when the foot comes town there is a loud tapping sound as the metal cleats on his shoes touch the ground. 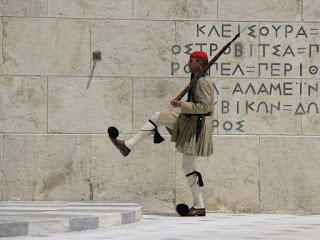 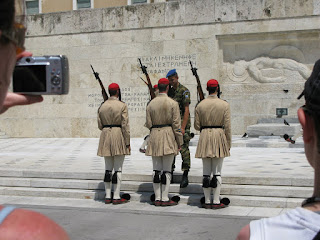 There are many ways to dance .
I hope you enjoyed these pictures of very hot soldiers doing a very tough job.
If your Sweet Years are heating up as we reach the best of summer be glad you aren't dressed like this!
Be well ... remember if there is an opportunity to dance.... high step it!

Scenes that look so familiar...I lived in Athens for awhile over a decade ago and remember these Evzones and the huge steps they would take as they changed guard shifts. I can't imagine doing it in 112-degree temps though. (I lived there in the winter/ spring.) Hope you had a great trip! 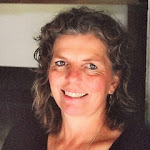